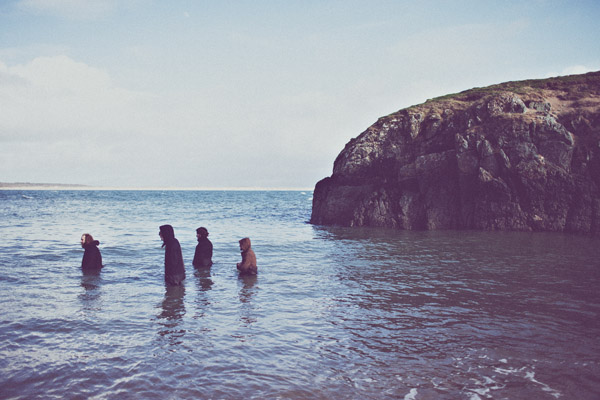 My last post was the results of a band shoot I did for my good buddies The Mekkits on Llanddwyn Island in Anglesey for the inlay card of their new album Pompeii/Vesuvius. The trip to Llanddwyn Island was dual purpose (triple if you count the subsequent surfing session!) – partly to do this photoshoot but also, more importantly, to then film the video to their song End of the World Blues.

As you’ll see from this post, it involved underwater camera housing and a lot of very patient and very cold lads wading around in the freezing Atlantic Ocean in February. It was really great to watch them film it so I took a few candid shots of the process so people can see what was involved in creating the final masterpiece! As you’ll see from the finished video, it was completely worth it and I think it looks absolutely amazing.

Please do check out the other three brilliant videos they have released over the last couple of weeks:

History is actually entirely made from footage from Adam’s grandpa’s homemade family films he made from the 1950s onwards – the adults are his grandparents, great-aunts/uncles etc, and the kids are his dad and uncles/aunts. His grandpa was really into film and tried out loads of crazy retro camera trickery – so worth a watch, it’s brilliant!

This series of quick-succession video releases are all leading up to their epic album launch party this Friday 25th May 2012 in the St. Philip with St. Stephen Church in Salford, Manchester. It will be completely brilliant! You can buy tickets here and each ticket purchase buys you entry to the gig itself, PLUS entry to the after-party in the Northern Quarter, PLUS a copy of the double-album on the night. Deal of the century! If you need any more persuasion, check out their amazing press and reviews – very well deserved praise and this night will be even better.

It’s such a pleasure to blog these behind the scenes pictures as I really hope it shows people a little taste of all the hard work, enthusiasm, fun and commitment that these lads have poured into their album and everything associated with it. They are a tight knit group of friends who would do anything for each other, and the warmth, laughs, history and chemistry between them is so evident in the brilliant music they create together. You’d be crazy to miss this Friday, its going to be a show and a half, so please get yourselves a ticket, or a copy of the album if you really can’t make it, I promise you won’t regret it. See you there!